Segara Ninda - residence of Ku Din Ku Meh
The Segara Ninda, home of Ku Din Ku Meh, shares the distinction of being a good example of an upper-class 19th century Muslim residence with the Syed Alatas mansion. Both structures incorporate an interesting mix of European, Indian and Malay cultural influences.
Located at No. 20 in upper Penang Road is another beautifully restored heritage home that once belonged to a prominent Penang Malay. This century-old mansion, of an early 'Straits Eclectic Muslim' design, belonged to Ku Din Ku Meh, whose real name was Tengku Baharuddin bin Tengku Meh.
Ku Din Ku Meh was born in Anak Bukit, Kedah. An early bloomer, Ku Din's first job was as the Head of the Kedah Prisons when he was 14. He loved literature and was fluent in Malay and Thai. A copy of his book, written in Jawi, is lovingly preserved at his former home. In 1897, Sultan Abdul Hamid of Kedah appointed him High Commissioner of Setul and he assumed the title of "Raja of Setul" in 1902.
The partitioning of Kedah into four separate territories by Thailand, during the 19th century, caused Setul to remain in Thai territory until the present day.
After Ku Din's death in 1932, the Segara Ninda was sublet to tenants. The subsequent repeal of the Rent Control Act made accommodation at prewar houses unfeasible, and Ku Din's house was soon vacated.
Rather than letting the ancestral home fall to ruins, the fourth generation of Ku Din's descendants came to the rescue and restored their great grandfather's double-storey home to its former glory, while preserving its architecture and original features.
Their next brilliant move was to convert the restored premises to an affordable yet small and cosy hotel with 14 rooms. And since it was already located right smack along George Town's commercial and entertainment belt, accessibility wasn't going to be a problem.
Despite the restoration and slight modernisation, much of the old grandeur can still be felt and seen. I sensed this upon entering the house, and was immediately transported to halcyon days of old government holiday homes and rest houses. It is a very relaxing and soothing feeling.
An added treat for the guests, if they request for it, is to be treated to an oral history of Ku Din by his great grand-daughter Tengku Hamidah (picture below), delivered with the accuracy and eloquence of a history teacher! Ku Hamidah otherwise helps her brother Tengku Yahaya manage the place, which also sells souvenir items of heritage significance.
I could not help but notice that although the mansion is situated along busy Penang Road, the noise from the street doesn't intrude into the building. Such is the wonder of antique architecture!
Segera Ninda20 Penang Road10000 PenangMalaysiaTel: 604-262 8748 / 016-440 4466 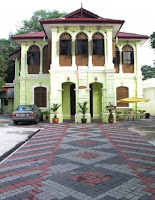